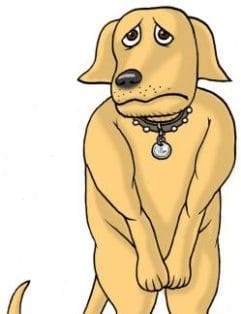 Rightly so, spaying and neutering is important to reduce the number of animals wandering the streets alone, living their lives in shelters, or ending up on “death row”

But does this describe your animal and how its life will turn out?

In fact we should look to Europeans who are less inclined to de-sex their pets. In certain countries it is even illegal unless there is a medical reason. Compared to the US many European countries don’t nearly the number of stray animals even though they don’t de-sex nearly as many dogs and cats (Sweden, Norway).

With neutering and and spaying your animal might face and entirely different fate as a result of the push to remove vitally important hormone glands.

Emerging research in dogs is showing that this common practice indeed comes with a slew of problems.

Here are the facts!

That’s not a pretty picture, wouldn’t you say?

Spaying and neutering before puberty is especially problematic. If we think rationally for a minute, how would removing a child’s reproductive organs before puberty affect their growth, maturation, and development? Puberty and sexual maturation is vital for bone, brain and organ development.

A mix breed 2 year old female dog patient more than doubled her weight after being spayed at 6 months of age. Instead of weighing 25 lbs she ballooned to 60 lbs. Reason: her thyroid gland shut down almost completely. Thankfully with some hormone therapy she is losing the extra debilitating weight. She can play like a young dog again.

Urinary incontinence is also far too common, and so are CCL tears and behavioral issues.

But what about mammary cancer if the ovaries of my female dog aren’t removed?

The firm recommendation of spaying to prevent mammary tumors is still very prevalent, but a recent systematic review of research done on the subject indicates a weak evidence of development of said cancer. The risk of other cancers as a result of spaying a female dog is much higher and deadlier as well. With regular screening mammary tumors can easily be detected and removed, resulting in a good prognosis.

On the flip side, intact female dogs can face another issue that can be life-threatening if not addressed promptly: pyometra, which is an infection of the uterus due to accumulation of uterine layers. Unlike women, who shed the built-up material every 28 days, female dogs retain it if they don’t get pregnant.

Based on this new knowledge, I’m sure you can appreciate that spaying and neutering is not a ‘one size fits all’. The risk and benefit ratio needs to be considered very carefully. If you’re a responsible animal guardian, you can choose what best suits your animal’s situation.

Cats – They Are Different

Our ‘alien’ friends come with their own issues. Left intact you might end up dealing with catfights in the middle of the night or an amorous spectacle disturbing your sleep. Intact cats tend to mark their territory and make your home rather uninviting. Fighting also results in abscesses and increased risk of FIV infection.

As for humans, there are options for your animals as well. Because most of these alternate routes are not mainstream approaches, you may need to do a little research to find a veterinarian trained to execute them. But you’ll find that it’s worth it.

Vasectomy is relatively easy to perform. A relatively new approach is to kill sperm-producing cells chemically through injection into the testicles. It has the advantage of rendering the dog infertile, while also decreasing the amount of testosterone by 50% rather than having none left.

For females, it is a little more tricky One solution is to only remove the uterus while leaving the ovaries intact. Unfortunately, this procedure has not been studied yet and there is a risk of stump pyometra if small amounts of uterine tissue are left behind during hysterectomy. Tubal ligation is an option as well, but it doesn’t remove the potential for developing pyometra.

If you’re looking to change your dog’s behavior the result may not be what you’re looking for. A retrospective study of 42 dogs found that roaming was the behavior best controlled through neutering, but so does locking your door. Urine marking in and around the house, mounting and inter-dog aggression also declined in 50-67% of dogs. No change was reported in those with territorial, fear-induced aggression and food aggression. Dogs castrated pre-puberty were just as aggressive as non-castrated dogs (study).

In fact, in humans, a decline in testosterone causes more anxiety and depression.

I recommend waiting until the animal is fully grown, which often comes after going through puberty. For smaller breeds that can be 9-12 months of age, while some of the large breeds take up to 2 years to close their last bone growth plates.

This can vary for cats as well with some also taking up to two years to be done growing.

As you know by now, I always like to do my research and challenge out-dated beliefs. I hope this information helps you to make even better choices for your beloved furry companions.